Prices in Prime Central London have decreased 20.4% since the peak in June 2014. In the same time period, the GBP v USD rate has reduced from 1.71 (June 2014) to 1.29 (Nov 2019), meaning there is an opportunity for both UK and foreign investors, (particularly US investors) in the Prime Central London market.

The table below shows several declining cycles in the Prime Central London market. The current cycle, although longer than each of the previous cycles, shows a drop off in both real and currency adjusted values similar to that of the Global financial crisis in 2007/8. Forecasts suggest a significant post Brexit bounce, and a c. 20% rise in Prime Values over the next 5 years, which will outperform the rest of the London market (4% growth).

End of the decline cycle

The annual rate of price falls for properties worth £10 million or more has halved over the Period Q3 2018 – Q2 2019. Significantly, in the first quarter of 2019, prices held their own for the first time in more than five years. The market is therefore becoming increasingly good value for a wide range of international buyers, despite the uncertainty surrounding Brexit and the market’s adjustment to greater exposure to UK taxes.

Given the dollar strength, it is unsurprising that the U.S. buyers are now the second most prominent group of international buyers in London behind China buyers. US Buyers accounted for 6% of purchases in prime central London during the first half of 2019, a figure almost double that of their presence during the entirety of 2018.

The diagram below demonstrates the relative value to the US Dollar investors of investing in the Prime London market, when compared to other cities around the world. 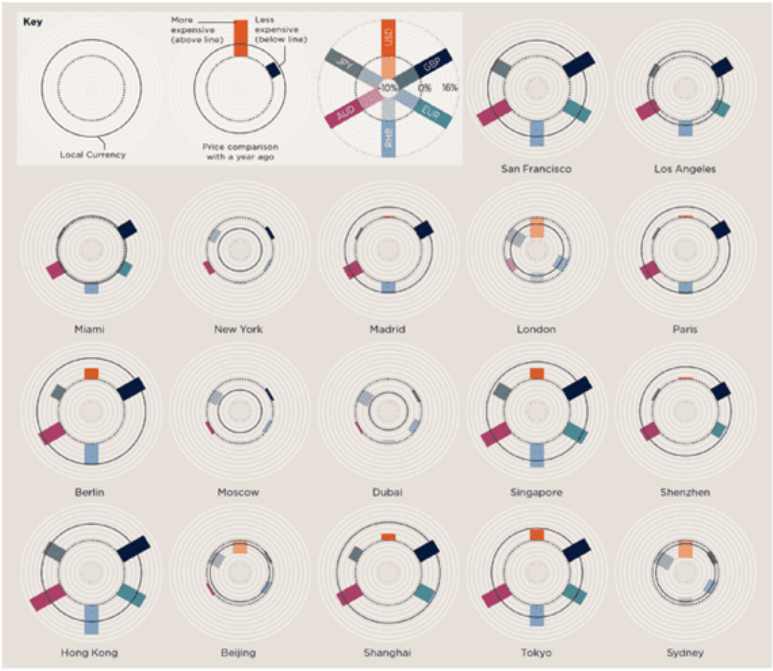 Given Sterling has continued to weaken, and capital values decreased, the Prime London Residential market looks particularly appealing to US Investors, when compared to Prime markets across the world. The relative drop for US dollar investors was 9% Mar 2018 – Mar 2019.

Sentiment in the Residential property market continues to be driven by ongoing political uncertainty surrounding Brexit, but should a Conservative majority become a reality, as predicted by YouGov polls, the relative weakness of Sterling v Dollar/Yen and a sharp decrease in prices since the peak in 2014, there is reason to believe that there will be a strong bounce in the Prime London Residential market, and a good buying opportunity at the start of 2020.

Savills forecast for Prime Central London show a 5-year forecast growth of 20.5%, returning to the value levels of 2014.